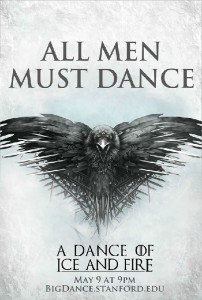 Friday, May 9 at 9 pm the fun begins, and lasts until 6 am on Saturday. We’re not sure whether this year’s theme is a promise or a threat to male dancers. After all, they will have to do a LOT of leading (i.e., thinking), as well as moving, during the couples dances, which all experienced male dancers can attest is very tiring. In any case, this will be the 21st year that Stanford’s amazing Richard Powers has led this event, and doubtless at 6 am there will be a lot of dancers who are 10+ year veterans.

Two women, with markedly different stories, spoke on May 3 in Menlo Park, CA about their experiences in World War II. Both published books in August 2013. Eva Maiden, who is Jewish, was 3 in March 1938 in Vienna, when Hitler’s troops invaded Austria. Soon after the invasion, her parents (both physicians), brother, and she began suffering a variety of lost privileges and mistreatment. They were relatively fortunate, as a relative in Switzerland helped them get visas to leave Austria, and they eventually arrived in New York City by ship from Italy. (Her book is “Decisions in the Dark: A refugee girl’s journey”.) Sophie Stallman was 13 in September 1939 when the Germans invaded Poland. A fearless child, she already had flown in an open-cockpit fighter plane, learned to parachute, and to shoot guns. She became a member of the resistance at 15, carrying out a number of dangerous missions, and survived the war. After the war she was a refugee for years, married and had two children, and in 1956 finally was able to get a visa to the U.S.(Her book is “My War, My Life”.) Both agreed that young men in those countries all had to serve in the military, and many lost their lives.