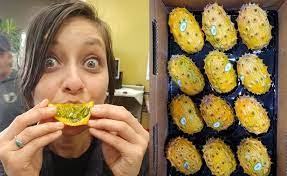 We are an adventurous eater, so we bought a kiwano horned melon in Safeway, based on an article in Parade magazine. It was esoteric-looking, which was surprising at a store that is so mainstream. When we were preparing a small plate of fruit for breakfast we were baffled as to how to eat it. The Web advised us to slice it open and spoon the pulp directly from the rind. We are brave eaters of new foods, but this fruit exceeded our limits. Other fruits such as cantaloupes have seeds and goo inside them, but people (including us) throw the seeds and goo away. Apparently, it is a popular snack in Africa.